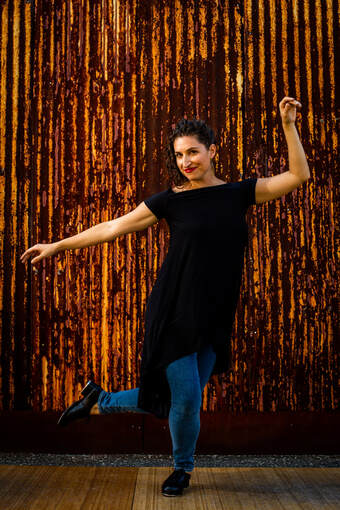 Kat Echevarria Richter, MA began her apprenticeship with the New Jersey Tap Ensemble at the age of nine. She trained under Karen Callaway Williams, Paris Mann, and the Ensemble’s Artistic Director, Deborah Mitchell, and was promoted to Principal Dancer while still in high school. In 2005, she received a scholarship for a year of study at Oxford University, where she choreographed several productions, and returned to the UK in 2009 to pursue her Masters in Dance Anthropology. A regular performer at the London Tap Jam, Kat wrote her MA dissertation on the performance of tap’s “national anthem,” the Shim Sham Shimmy, and continues to teach and present research throughout the US and the UK. She also writes for Dance Teacher Magazine and Dance Spirit and has set works for numerous companies including Chorégraphie Antique, the Bryn Mawr School for Girls, and The Lady Hoofers.

In 2011, she co-produced Too Darn Hot, an all-female, all-tap revue for the Philly Fringe Festival. At this time, she co-founded The Lady Hoofers. In addition to directing The Lady Hoofers, Kat is a professor of Cultural Anthropology and Dance. She teaches at Stockton University and writes for the Philadelphia Dance Journal. 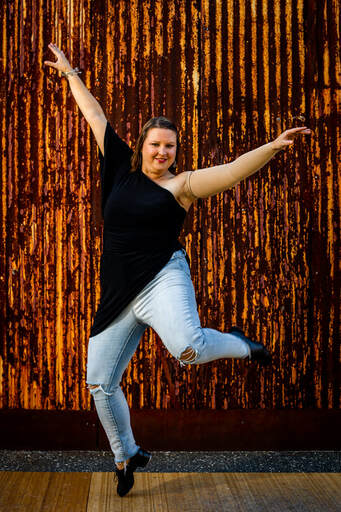 ​​Katie joined The Lady Hoofers in 2012 to perform at City Hall Presents, and she quickly advanced to Assistant Director, and now Managing Director. Her choreography is performed regularly by The Lady Hoofers, and has also been featured in several high school productions and Footprints Tap Ensemble's annual Tap Jam. Her piece Unchain My Heart was selected for performance at the DanceUSA Conference in 2013. In addition to directing The Lady Hoofers, Katie is a Senior Lecturer of Writing Arts at Rowan University.